The first measurements of the synthetic, highly radioactive element have been taken by researchers, but what is Einsteinium?

This resource is best suited to Year 8, 9 and 10 Chemistry students who are learning about elements, the periodic table and atomic structure. 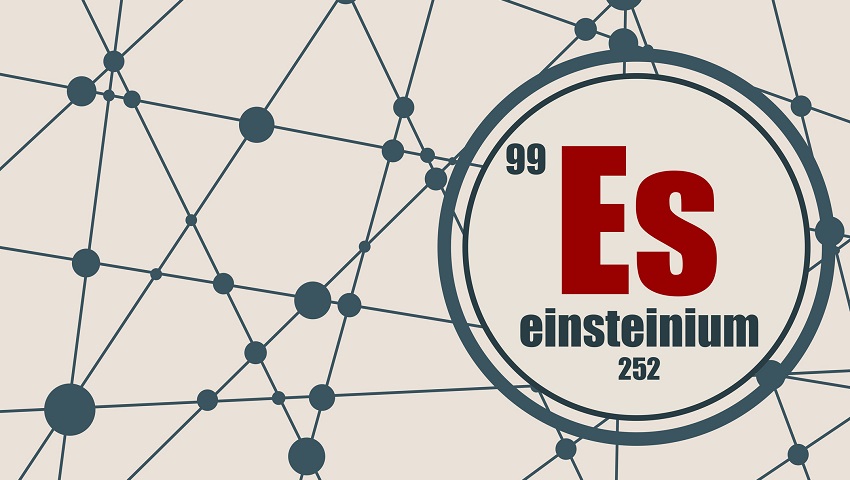 It is called an Actinide metal element, which is the group of elements with atomic numbers between 89-103. They are named after the first element in this group, Actinium.

Of the 118 elements in the periodic table, only 94 occur naturally. Einsteinium is not a naturally occurring element, but was discovered in the debris of the first hydrogen bomb explosion in 1952, and is very radioactive. It is named after Albert Einstein, even though he didn’t have a role in the discovery of the element.

Einsteinium releases so much energy during radioactive decay that it glows blue in the dark.

How is Einsteinium made?

Einsteinium is a volatile element and can only be made synthetically. It does not occur in nature because it is very unstable, which means it radioactively decays over time.

To make Einsteinium, we can bombard other lighter elements, like Californium, Uranium or Plutonium, with neutrons in a nuclear reactor.

When Uranium, with an atomic number of 92, is bombarded with 15 neutrons, it undergoes beta decay. This happens when a nucleus has too many protons or neutrons – in this case, neutrons. The neutrons beta decay into protons. Seven neutrons convert to protons, making Einsteinium with 99 protons and 154 neutrons.

Elements are defined by the number of protons they have, which determines their atomic number, but they can have different numbers of neutrons. This affects how quickly they decay and is determined by how many neutrons the original elements are bombarded with.

Why have researchers only just been able to study the properties of Einsteinium?

Einsteinium 253 has a half-life of 20.5 days, is very radioactive, and can only be made synthetically in extremely tiny amounts in a nuclear reactor.

All of this makes it difficult to study, because it doesn’t last long enough to study as a pure element. It also has no known uses beyond understanding how elements behave, so many researchers choose to study other, more practical elements.

More: A short history of atoms

How did researchers study the properties of Einsteinium recently?

Recently, researchers were able to study the properties of Einsteinium by using an isotope – the same element but with 155 neutrons – that had a half-life of 276 days to make a chemical compound with carbon, oxygen and nitrogen.

This isotope is still very difficult to study as it’s hard to create and highly radioactive however the longer half-life means that researchers have managed to study some of this element’s properties for the first time.

What did they discover?

Their paper, published in Nature, describes how they synthesised around 200 nanograms of Einsteinium – for comparison, a single human cell weighs about one nanogram – and studied it using X-ray absorption and luminescence spectroscopy.

Using the synthetic compound, researchers were able to see how Einsteinium reacts with other atoms. One important thing they discovered with the valence state, or charge, on the atom, and the distance between Einsteinium atoms and the atoms it was bonded to.

“The more we understand about its chemical behaviour, the more we can apply this understanding for the development of new materials or new technologies, not necessarily just with einsteinium, but with the rest of the actinides too,” says co-lead researcher Rebecca Abergel, from the Berkeley Lab.

Einsteinium had a large bond distance, which in this case was because the electrons on the outer valence shell of the atom were far away. These electrons are responsible for bonding with other atoms because compounds share electrons in their outer shell. When this distance is large, the bonds between atoms is not very strong and they can break apart.

This distance information is important because it helps predict what other elements large atoms like Einsteinium can bond with.

Understanding these properties can give us a better idea about how actinides as a series behave – which may have useful implications for nuclear power production or radiopharmaceuticals.

The research is also edging onto the horizon of the periodic table and opening up possibilities to discover new elements. By isolating enough pure Einsteinium, researchers may be able to bombard it with particles to induce decay – and see what other elements can be created.

“Our results highlight the need to continue studying the unusual behaviour of the actinide elements, especially those that are scarce and short-lived,” the researchers conclude.

Learn more about this research on Cosmos.

Whip you up a diamond? No sweat

Scientists measure the weak charge of the proton