An old portrait has shone a light on dendrochronology.

Combining a passion for science and art to uncover lost artworks. Suitable for Earth and Space, Physics and Biology students in years 4, 9, and 10 to demonstrate a different application of scientific knowledge and understanding. 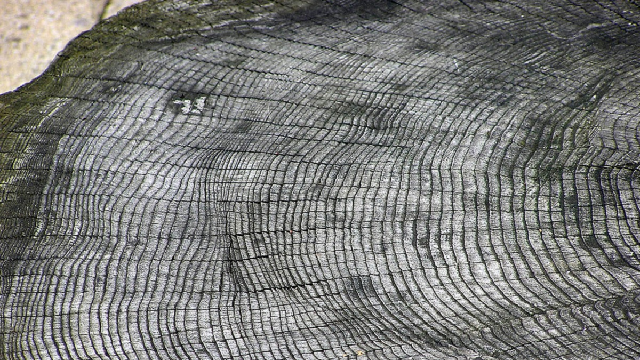 The Ashmolean Museum in Oxford recently announced that a portrait by Rembrandt, long thought to be a fake created after his death, was indeed an authentic work by the Dutch master. The announcement came after a study of the portrait’s wood panel.

Dendrochronologist – a scientist that dates tree growth rings and thereby identifies the age of various objects and phenomena – Peter Klein found upon examining the panel that it was oak felled in the Baltic region about 1618–28. Klein said the piece of wood came from the same tree as a panel used by Rembrandt for another work.

But what was the basis for these findings?

We spoke to the Australian National University’s Matthew Brookhouse about how the scientists cracked the code of the wood. Brookhouse wasn’t involved in Klein’s Rembrandt, but is a world leader in dendrochronology – the most interesting field we’d never heard of.

When studies such as the Rembrandt one are done, what is it you are looking for in the wood?

For these types of projects, where people are working with oak and dating artworks, the primary data are the widths of tree-rings in the wood. The beauty of oak is that it has these very large pores at the start of each ring. So it’s actually relatively easy to identify the ring boundaries. Measuring the width of rings is then a fairly straightforward process using a microscope or digital photographs.

Then the way to think about it is like a fingerprint. You need multiple points of reference comprising widths of many rings in sequence, with that you create a picture of a tree’s life. Generally, when you’re dating panels like this, you’re looking for a minimum ring width sequence of about 100 years.

Like a fingerprint – the more points of reference you have, the more confident you are associating that fingerprint with another. But instead of associating fingerprints – for oak we have a library of tree-ring widths from different areas of Europe spanning more than one thousand years. By sliding (electronically) your sample past these established records you can identify where your tree-ring width measurements fit best.

In the end it comes down to correlating the long-term uniqueness of year-on-year variation in your tree-ring width series with an established record.

It seems amazing that the result identified the wood as being from a specific area. How do dendrochronologists track wood back to its source?

When a tree grows, its growth is the product of both intrinsic and extrinsic forces. There are intrinsic tree-level factors – insects eating leaves, competition with neighbouring trees and things like that. Then there are extrinsic climate factors. Yearly variations in temperature and rainfall can lead to differences in the amount of growth. That’s represented by year-on-year variability in growth. Even between close areas there can be subtle differences in climate. These differences are reflected in the differing ring-width patterns. As you move further away, the differences grow. These differences are larger again if you move between climatic regions, say from a maritime to a continental climate. It’s these site-level and large-scale differences in climate that are the key factor for determining the geographic location and time that the tree was grown.

Because of regional climate differences, oak tree-ring series from around the UK, northern France and the Netherlands will be very different to tree-rings from the Baltic area, where this wood in the Ashmolean panel came from. Even then, areas of the Baltic exhibit slightly different tree-rings series.

The researchers identified the panel as being from the same tree as another Rembrandt painting. What would lead them to that conclusion?

The key to Ashmolean study is that Peter Klein has indicated that the panel of wood came not only from the same location [as wood panels Rembrandt used for other works], but from the same tree. In a way that’s easier and more definitive than trying to trace it back to a location.

That is, when you compare tree-rings from different trees, the correlation falls – and as I said, the further you move geographically away, the larger the difference. We haven’t seen exactly what the correlations for the Ashmolean piece to the other Rembrandt pieces were. But for researchers to make a statement that the timber came from the same tree, the correlation between tree-rings in the two artwork samples must have been very, very high.

You’ve done similar investigative work with artworks using the Australian Synchrotron. What was the advantage of using that over traditional methods?

Obviously, when working with wood panels as an artist you coat them with paint, but you’d also coat the edges of the wood with fixatives – resin and so on. Those edges are what we use to examine and measure tree rings. If that’s covered over you just can’t see the rings, and the edge must be resanded.

When it comes to sanding something that might be a Rembrandt, or something else very valuable – there’s a lot of anxiety about taking a sander to the edge of a panel. Radiation from the synchrotron allowed us to look at the panel that’s underneath the painting itself, without needing to physically alter the panel. The synchrotron radiation gave us a map of the wood structures, which we could then use to measure the tree-ring widths. It also meant we could make the measurements in the panel itself rather than just on the edge. And we could do that in a non-destructive way.

Dendrochronology obviously has many more uses than dating/authenticating art.

You can use dendrochronology to look at forest dynamics – anything to do with forest growth, mortality, and regeneration. We can also reconstruct fire histories of areas, which is something that is particularly important at the moment.

I’m currently looking at snow-gum dieback in the mountains, which is caused by wood-boring insects which attack living snow gums. These wood borers kill the trees over a period of a few years. What we’re seeing is a widespread outbreak of wood borers, and we’re trying to understand what the history of the current outbreak is, when previous outbreaks began, and what – in terms of climate – might drive outbreaks. The only way to extract that kind of previous information is from tree-ring records. That is, we can reconstruct a map of how dieback has spread throughout the mountains, and identify where it started. Once we work that out, we can work backwards to identify the trigger that set the outbreak in motion. We can also look at climate conditions that might favour dieback. We’ve never had that level of insight before for a dieback phenomenon.

Can you track the climate with tree-ring data?

Absolutely – it’s called dendroclimatology. You can extract and reconstruct previous climates using tree-ring widths, density, and isotopic composition. For example, tree-ring density is related to the amount of heat energy a plant can accumulate, and then it uses that energy during winter to create denser timber.

The climate records that people are using overseas to gain an insight into potential changes due to greenhouse gas emissions – a lot of those records and reconstructions are tree-ring derived. High-latitude northern-hemisphere records really demonstrate a change in temperature over time. In the southern hemisphere there is currently a great deal of effort going into similar studies. I’m working with researchers around Australia to look at Callitris (cypress pine) to build climate records. So far we’ve focussed on Arnhem Land. Using Callitris we reconstruct aspects of the monsoon, and how that monsoon might be changing in association with changes in large-scale oceanic climate drivers.

This article was originally published on Cosmos. Read the original article here.