Rachel Rayner takes us on a tour of the spectrum beyond the visible and explains why dogs help.

Explore the frequencies and wavelengths of the electromagnetic spectrum in a fun way in this resource for Year 5 and 9 Physics students as they learn about waves.

You are radiating. You always have been.

Or you may just have an actual fever – booked your flu shot yet?

We all radiate light. But not visible light. The universe has a rainbow that is made up of so many more colours of light than the familiar spectrum of ROYGBIV (red, orange, yellow, green, blue, indigo, violet). When we talk about the light of the universe at its most minute level, the quantum level, we’re talking about light as photons. So, what exactly is a photon? Its name comes from the Greek word for light, “phōto”. A photon is generally described as “light as a packet of energy”.

A photon is not an envelope or bag for the energy to go into. Rather, it is the light itself, with an inherent, specific energy. A photon is a single energy level of light, and of a single size, which cannot be made smaller. Photons exist in the quantum world. This means they have a dual existence as both a wave and a particle. But like a good poker player’s hand, a photon will only reveal its identity as a wave or as a particle when observed by others. Before then, all we can do is consider it as both. Welcome to the concept of quantum duality.

Deeper: Explainer: Is light a wave or a particle?

Physicist Erwin Schrödinger used the example of his cat to explain quantum duality. The abridged version is that a cat in a box could be alive or dead, but you don’t know until you open the box – in the interim, it exists in both states. Follow? Perhaps an ANZAC Day two-up analogy works better: the coins are both heads and tails while tossed in the air, and will only truly become tails (or heads) when they land.

This is quantum duality.

There are numerous ways to measure photons. The more energetic photons usually have their wavelengths measured in Angstroms – which is the radius of a chlorine, sulphur or phosphorus atom, measured from the centre of the atom to its covalent electron. However, two units of measure that are used more broadly are hertz and metres. Both of these units are used for any wave – we tune our radios in hertz, for example, so the station 105.7FM is at 105.7 megahertz. (In fact, radio waves are a type of light – they’re photons, too!)

A photon goes to a hotel and the doorman says, “Can I take your bags?”

Hertz, as a unit of measure, tells us how many times a wave cycles in a second, which for many of us is hard to imagine. Using metres to distinguish different photons from one another is a more easily understood yardstick.

Photon wavelengths range from extremely small, at a trillionth of a metre, to huge, at tens of metres. This range encapsulates nearly everything that we experience, like feeling warm, receiving a phone call, microwaving left-overs, and just optically understanding the world. It’s the full spectrum.

Sections of this spectrum have names familiar to most of us. The full range of photons, listed across the bottom, in order from highest energy to lowest energy, goes from gamma rays to X-rays to ultraviolet light to visible light (which is our visible rainbow of ROYGBIV) to infrared light to microwaves to radio waves.

Despite their huge variations in energy levels, all these wavelengths travel at the same speed – the speed of light. Which makes a photon the fastest thing in the universe (in a vacuum – there’s always a caveat). Light travels at 3×108 m/s, which is 900,000 times faster than the speed of sound (through air, at sea level; you’ve got to be specific about these things).

In our classical world of Newtonian physics, where F = ma, more energy generally means more speed. But not here! We’re in the quantum world now, and things are very different.

A quantum leap
In the everyday world, you know what something is, where it has been and where it is going. Think of a tennis ball on the ground: you know that if you pick it up and let it go, it will fall to the ground and bounce back. In the quantum world, you have only probabilities: the probability that something will be here or there; the probability of whether it is a wave or particle, or whether it exists at all. If you let the tennis ball go, there is a probability that it will hit the ground or fly away; that it isn’t a tennis ball at all but the path of its movement, or that it just isn’t there. And neither are you.

We’ve used cats to help explain things, but did we mention something about letting the dogs out? Here goes …

These are the Chihuahuas of this light-filled world. To get anywhere quickly, their little legs (short wavelengths) are churning away at a great rate in order to keep up with their larger friends. They are going to need so much more energy to travel any distance at all.

At the other end of the spectrum are the radio wave photons. With their long wavelengths and low energies, these are the Great Danes. With a few lazy, languid strides, they can get anywhere just as quickly as the Chihuahua, while expending much less energy in the process. 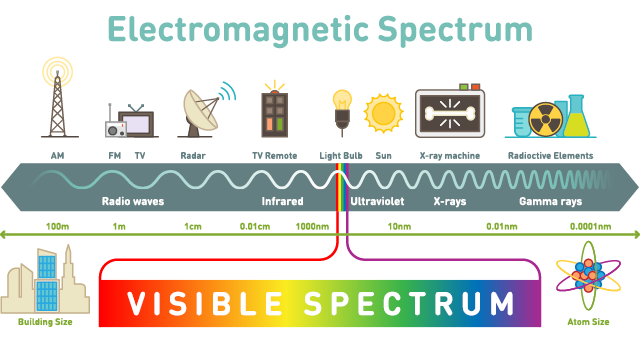 EM wave v EM Wavelength
Light is an electromagnetic wave: it is a ripple through both the electric field and the magnetic field simultaneously. These two fields exist perpendicular to each other, so a wave through them is represented as two sine waves at right angles to each other.
The wavelength is measured from the peak of one wave to the peak of the next, or the trough of one to the trough of the next. This is different to amplitude, which is the height of the wave from trough to peak.

We’ve extended this analogy to the entire spectrum (below) where each photon gets its own canine representative.

Despite their different leg lengths, all these dogs are still going to reach the other side of the park at the same time (they all travel at the same speed, after all). Some just require more energy to do so than others – those smaller dogs will be moving their legs a lot more to keep up with the larger ones.

It’s important to paws (couldn’t help myself) here, and appreciate that this is not to scale. The Chihuahua photon has 300 billion times more energy than visible light’s border collie. That is a lot of tiny leg movements! But this is an analogy, remember. It may have gone to the dogs. But it’s much cuter than Schrödinger’s Cat; this is Photon’s Hounds. And, unlike that poor old cat, they get to live 100% of the time.

So, what are we humans radiating? Why, we are beautifully radiating infrared photons, which makes us all lovely (and loyal) golden retrievers.

Infrared photons are what we sense as our body heat. Infrared light is a colour of light that you can actually feel.

It sounds outrageous, but it’s true. 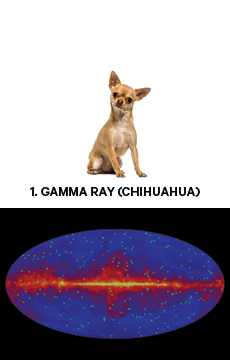 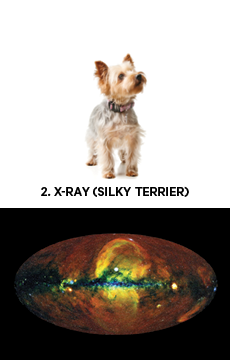 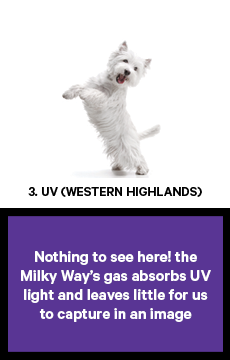 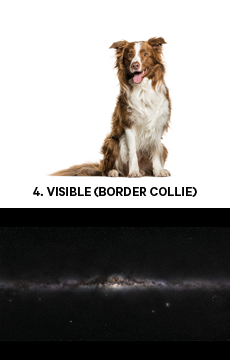 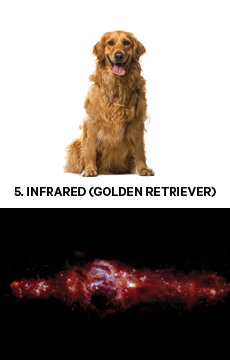 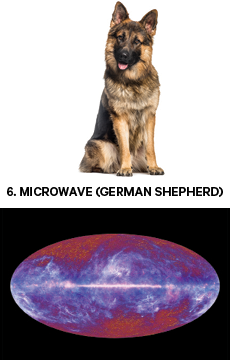 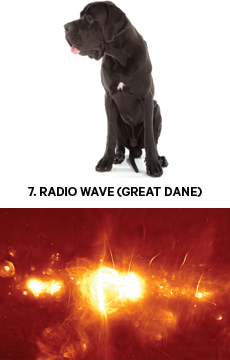 This article was written by Rachel Rayner, science communicator, poet and performer, for Cosmos Magazine Issue 92.