“Acknowledging, understanding, and confronting biases and the inequalities is the way to move forward, it’s this which catalyses words into action.”

Creating systemic change requires bold action to breakdown barriers for women entering and succeeding in STEM. Teachers can be (and are) a driver and an influence of this change. Use this article as inspiration for you and your students.

Mars is more seismically active than the Moon | Cosmos

“I would have been a scientist… but I was denied access to an education” says Aboriginal activist and Kaurna Senior Clan Leader Georgina Williams.

Williams’ story formed part of her Welcome to Country for the Catalysing Gender Equity 2020: Be part of the solution conference. And it was that story on unfairness, injustice, and her energy and tone that set the agenda for the next two days as over 350 scientists, STEM industry leaders, and representatives of scientific institutions gathered with one goal in mind – to create change.

There are already a wide range of programs and people making progress for gender equity.

However, as in physics, change is acceleration, which is sustained force over time, says astrophysicist and the Government’s first ever Women in STEM Ambassador Lisa Harvey-Smith. “Change is a verb”, she adds, and maintaining that push is required.

For Harvey-Smith, her recent partnership with Questacon</span called #WISTEMxQ, which aims to engage with young girls, as well as parents and educators are just part of the effort.

Later this year, Harvey-Smith will be launching a national awareness campaign to tackle the stereotype of lone geniuses. While we love to celebrate the icons of science, the image is unhealthy and counter-intuitive to what modern scientific research is about. Instead, the campaign will paint a new picture of collaboration for those who wish to pursue a career in STEM, an image that will add incentive for women and others who thrive in social environments.

For institutional change, the Science in Australian Gender Equity (SAGE) have rolled out the Athena SWAN program in Australia, after its successful implementation in the UK where it was developed. The program sets in place different levels of achievement for institutions to more-or-less clean up their act and implement real diversity and inclusion. In the UK, the Chief Medical Officer has even implemented measures stating that in order to access funding initiatives, institutions need to obtain at least a silver level.

Cultural transformation can be overwhelming. Those in leadership roles can do so much, but individuals can also make real change. Corey Tutt, of Deadly Science, who is NSW Young Australian of the Year, is a young Kamilaroi man fostering the wonderment of science in schools in remote communities by sending them STEM-related books and educational resources like telescopes. Young astronomy PhD student, Kat Ross, created a petition to get more women featured in the NSW school curriculum after discovering there were two women scientists mentioned, compared to over 70 men. The petition has forced the NSW Education Board to enter discussions about the balance in the curriculum. These two individuals show that even grassroots activity can have huge impact. 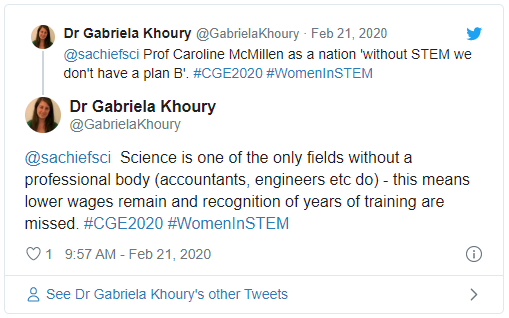 Changing the face of university institutions

Regional chapters of the SAGE network such as those in NSW have implanted changes within their universities. Whilst many institutions have gender equity targets, the general sentiment was that many less people feel like they have been reached. The current actions many have taken at institutional levels include gender-neutral language in advertised job positions i.e. “have the ability to” vs “have ‘x’ skill”, training in unconscious bias for greater awareness, and KPIs for deans. However, there is no mechanism to enforce these changes, nor is it mandated for reporting, and thus no data.

Interestingly the focus on professional staff meant that universities are not really looking at student cohorts. In engineering for example, it is acknowledged there is a presence of toxic male-dominated culture. Some women from engineering expressed their negative experiences and how it could push out people.

You can’t be what you can’t see

Representation of women in STEM in media is also considered to be a major issue, with an overwhelming majority of experts cited in media featuring a male voice. But as simple as it sounds – visibility and representation are important for society as you can’t be what you can’t see. Additionally, for women in STEM, media appearances can mean more opportunity, which lead to career progression.

According to Claire Mackay, the ABC Adelaide News Editor, they’re working towards having a 50:50 split in sources and expert talent by the end of 2020.

Creating pathways for the next generation of Women in STEM

The scarcity of female representation in the NSW school curriculum is mirrored in the Australian National Curriculum, say critics, with only around 1% of the scientists named in the national curriculum being female. And this, the conference heard, means there is so much that we can do to tackle stereotypes and visibility within the classroom.

To address the imbalance, there is a need to empower STEM teachers to be the ones who can provide female students with these role models, the conference heard. We need to ensure they can access women in the field, get them involved in decision making and leadership-roles in group tasks and speak to them regularly about their potential, where they can go and what they can achieve. 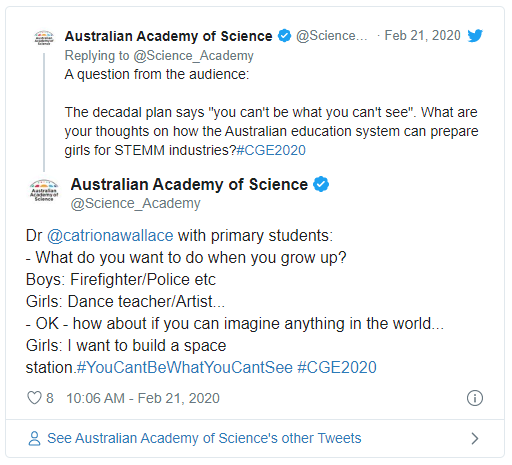 The equity issue is not just about women in STEM, with greater need for people to speak up on behalf of those who may be unseen or unheard. Angela Samuel, an engineer from National Measurement Institute, challenged Adi Paterson, the CEO of ANSTO, to advocate and include people of colour in their diversity targets – which he accepted.

To Tanya Monro, the Chief Defence Scientist, these challenges are not only important, but necessary. And that challenge needs to extend to everyone to amplify each other, to amplify the positives, to move away from the Australian culture of seeing the negatives and dragging things down. She wanted to see women celebrating women.

These things are easier said than done. We still have a long way to go to reach a truly inclusive industry.

But it’s when you cause a reaction that makes people defensive, you know you’ve pushed the right buttons. Acknowledging, understanding, and confronting biases and the inequalities is the way to move forward, it’s this which catalyses words into action. It lays the groundwork for targets and strategies to implement change. 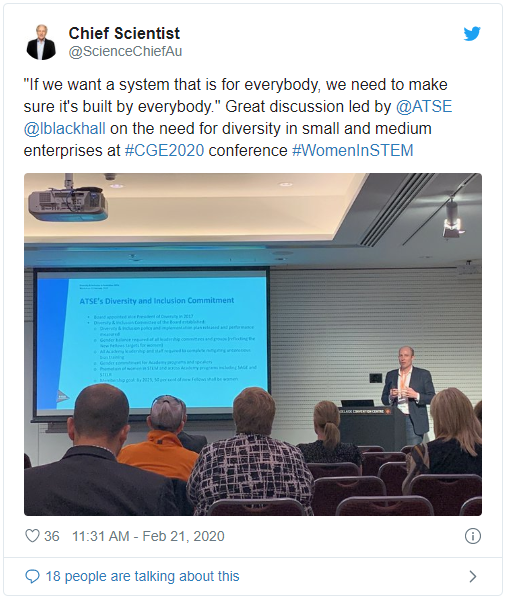 To nominate yourself or a colleague/s, simply fill out the online form. If you have multiple names and would prefer a template to fill out, email: [email protected]

Created by the Australian Academy of Science, it takes just seconds to create a profile: go to https://www.stemwomen.org.au/

Request a Women in STEMM Directory

Petition: Increase representation of women in STEM courses in the NSW Education Curriculum

A simple change to balance the representation of females in the curriculum can make STEM accessible to so many more young women. Sign here: https://www.change.org/p/stem-courses-must-teach-more-about-contributions-of-women-in-the-field

For ideas and inspiration as to how you can break down these barriers for students in your classrooms. Have a look at the Unconscious Bias STEM pack and the 7 Principles for a gender-inclusive classroom. Get more resources and inspiration on at https://education.australiascience.tv/.