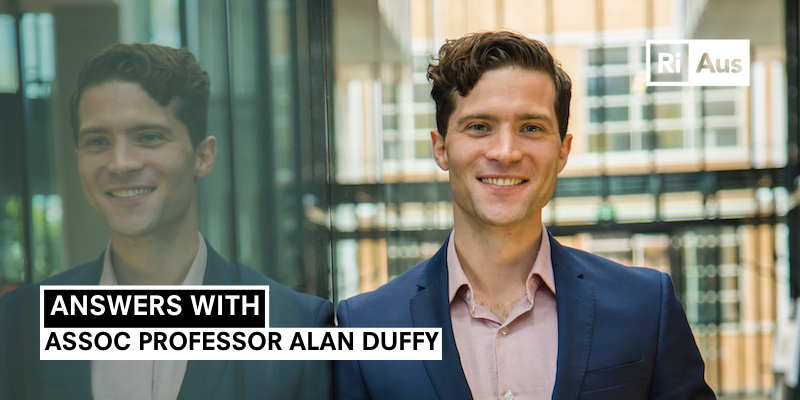 Associate Professor Alan Duffy is an astrophysicist at Swinburne University of Technology and Lead Scientist of the Royal Institution of Australia. His research involves creating model universes on supercomputers to understand how galaxies form and grow within vast halos of invisible dark matter. He then tries to detect that dark matter as part of SABRE, the the world’s first dark matter detector in the southern hemisphere. He is also Program Leader of SpaceTech Applications at Swinburne’s Data Science Research Institute bringing together astrophysics and space industries to create new opportunities for Australia in space.

What scientific or medical breakthroughs or discoveries are you most excited to see within your lifetime? – Milena, year 11 student from Springbank Secondary College, SA

What is your occupation?

I am an astrophysicist at Swinburne University of Technology, this is basically the same thing as an astronomer, and I also occasionally get called a cosmologist because I am trying to study the cosmos, and dark matter in particular, rather than focussing on say a single galaxy or star like our Sun.

Can you describe what this occupation entails?

As an astrophysicist I create (or rather simulate) universes on powerful computers, called supercomputers. Forming a universe can be thought of like baking, with ingredients and recipes all sitting in an oven (my computer!) In my case, the ingredients are atoms that form you and me and the stars, and dark matter – a mysterious substance that makes up 5 times more of the universe than all the atoms we can see put together! The recipe you follow is the laws of physics like gravity as well as the ways in which stars form from giant clouds of atoms. Live it in the supercomputer / oven to bake and after 13.4 billion years do you get a galaxy that looks like our Milky Way? If not, why not? Maybe I need to tweak the ingredients or even the recipe itself, letting me explore new physics and properties of the dark matter.!

Why did you choose this occupation?

I have always been fascinated by the world around me, my earliest memories are of trying to understand how it worked but it wasn’t until I read Hawking’s A Brief History of Time that I realised there was a career out there where you could follow your curiosity as your job. In my case that was astronomy. For the last decade I’ve devoted myself to understanding dark matter, and trying to explain 5 times more of the universe than everything we can see put together seems like a pretty cool challenge.

Did you need to do a particular course to do this occupation? What was your pathway into your job?

Most astronomers study sciences and maths in school, then physics in university – specialising in astrophysics for PhD (that’s where you get called Dr when graduating). In my case I obtained a Physics degree from the University of Manchester, and then a PhD in astrophysics from Jodrell Bank at the University of Manchester again but critically my qualifications had inbuilt travel. I spent a year at the University of Amsterdam in my undergrad and then nearly two years in Leiden University during my PhD, without the knowledge I gained from that travel, both about myself and my research, I could never have had the career or current role I enjoy today.

How do you use what you learned in school in your job?

Even at the cutting edge of science you’d be amazed how much of the things I’ve learnt at school are still relevant! Naturally there’s basic maths, like differentiation or integration, and solving equations as well as understanding processes like energy and motion – or gravitational potential and kinematics. I’m part of an international dark matter detector costing millions and the key science is familiar to anyone who has watched snooker balls collide. Make sure you learn the basics because they are still important even decades later!

What does a normal day at work look like for you?

I always arrange to meet my students in the morning, it means that we can discuss their research and progress, before anything else happens in the day to derail my plans – ensuring their work is on track is the most important work I get to do. After that there may be a breaking story in science and I can be called up by The Project which means dropping my other plans for the afternoon recording of the episode, or I will have a chance to write up something amazing for Cosmos or else if I’ve got meetings arranged I could find myself speaking to engineers about the detector, or expert programmers about new ways of using the supercomputer or just enjoying a few moments to write my next research paper. In other words every day can be different, but I’m always getting to meet interesting and intelligent people which is always a great day.

What do you enjoy about your occupation?

I love the range of things you get to do in a university, from giving physics lecture, to researching simulated galaxies or building dark matter detectors with my PhD students. There’s lots of travel in the role which lets you explore new countries and cultures.

What do you dislike about your occupation?

The advantage of travel can also be one of the hardest things, as its common to have to move cities and most likely countries to find astronomy jobs (I went from the UK to The Netherlands to Australia, from one side in Perth to the other in Melbourne!) IF you are free to move then this is great, but it gets tough when you have to ask a partner or kids to move with you later in your career.

What is most challenging about your occupation?

I would say trying to find balance is the hardest thing about astronomy, as the research will follow you home after work and over the weekends if you let it. The simple reason is that I became an astronomer to solve the mysteries of the universe, so I find myself thinking about it ALL the time if I’m not careful. And everyone needs time away from the research to enjoy the rest of their life, most importantly spending time with friends and family! But honestly this is a nice problem to have..!

As the great baseball philosopher, Yogi Berra, once said “It’s tough to make predictions, especially about the future” but I think it’s safe to say that computers and machine learning will be present in almost every conceivable job. That familiarity with programming will be a positive, but that a deep understanding of a specific topic and its fundamentals will be key. If a task is repeatable it can be replaceable by AI so careers which are one off acts of creation or of bringing together different bits of knowledge and understanding will flourish. By learning the basics in science well, and keeping yourself flexible and creative, as well as developing your team-work and inter-personal skills, you’ll be well placed for the future of work.

What’s been an eye-opening thing you’ve learnt in your career?

Just how much there is to learn. I used to think I had a good handle on just how much was out there to be discovered but every year I hear of an entire new field of impossibly exciting research that is completely new to me. It’s exhilarating to be in science today, there’s so much humanity is progressing in so many domains of knowledge.

Do you have any suggestions for someone wishing to do your occupation?

Study physics and astronomy at school and university but more than that, join your local amateur astronomy society to learn from experts about taking pictures of the night sky, and get to speak with people as passionate as you are about the latest discoveries in astronomy. Go online and do real astronomy research with projects posted online at zooniverse to start getting experience of science. And of course mark sure to take up work experience opportunities at your local university (just email the head of the astronomy group and ask what’s possible!) It’s all about standing out, showing that you love astronomy and are willing to work hard to understand it. Passion and self-drive are really what I look out for in my students.

If you had the chance to change your occupation what else would you do?

It still uses computers, but I would explore the connection between our genes and health, a field known as bioinformatics. Exploring dark matter is cool, but there’s also ‘dark’ genes in our DNA which seemingly don’t do anything in our body and yet we know that they must play a role as we need these genes to be healthy. There’s just as much to learn about ourselves still as there is the universe beyond us.

What are you most passionate about in your job?

Finding brilliant, passionate young students and being able to help them, in however small a way, in their exploration of the universe. It’s a thrill to know I might have helped someone far smarter than I, on their journey to discoveries I can never make. It really is an honour to meet all people who want to learn and have that chance to teach them, however briefly, something new.

If you want to ask your students questions to a scientist, simply fill in the form below and we will be in touch once we have got a response.