As climate change affects agricultural crops, research into increasing the rates of photosynthesis could help to feed an ever-growing world population.

This article and short video tell us about the science behind agriculture and how scientists are ensuring we have enough food to eat in the future. The resource is best suited to Year 7-10 STEM students across all sciences. 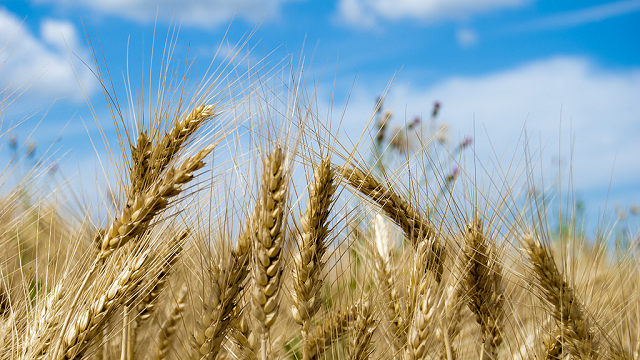 When you think of the word protein what do you think of? Phrases like do you even lift may come to mind, along with images of bodybuilders downing protein shakes.

But when Dr Brendon Conlan, from the ANU Research School of Biology, thinks about proteins, he is thinking about them in a totally different kind of way to 100% whey.

Dr Conlan’s favourite protein may not be available at the gym, but it is all around you.

“Rubisco is the most abundant protein on the planet,” says Dr Conlan. “It makes up 50 per cent of soluble protein in a plant cell.”

You could even argue that this microscopic ball of chemicals is the most important protein on the planet.

Deeper: The Future of Food

This is because Rubisco plays an essential role in photosynthesis: the process in which organisms transfer light energy into chemical energy.

Within photosynthesis, the enzyme Rubisco acts like a little machine, “grabbing a molecule of carbon dioxide and fixing it into a more complex state that can be made into sugar”.

The whole system is powered by sunlight, and plants use these sugars to make more complex carbohydrates, “which is what we like to eat”.

“Photosynthesis is what powers life, so without it, none of the organisms that we recognise would even exist,” says Dr Conlan.

Plant scientists are interested in Rubisco as it may be able to be improved to produce greater yields from agricultural crops like rice and wheat.

This is important considering that by 2050, the world’s population is expected to reach nearly 10 billion. And as Dr Conlan explains “to feed that many people we need more food”.

But as far as enzymes go, Rubisco isn’t pulling its weight.

Also: The little-known native foods about to change the world

“Rubisco is quite slow, so we are looking for better versions of Rubiscos that exist in other species, and seeing if we can transplant them into higher plants.”

If crops like rice and wheat had more efficient versions of Rubisco, they could produce more food faster.

But “crappy enzymes” isn’t the only area of photosynthesis that could be improved. Photosynthesis is affected by heat and climate change, which can be a problem for agricultural crops.

“In the central east area of Australia, we are seeing a lot more intense heat coming in at the end of the growth period. These heat waves can last one or two weeks, so that really knocks down photosynthesis and slows the amount of starch that is put into the grain,” says Dr Conlan.

“This is a real phenomenon, it is happening more regularly in Australia and it can affect yields quite badly in the long run.”

Along with the research into Rubisco, Dr Conlan and his colleagues from the ARC Centre of Excellence for Translational Photosynthesis, are now looking at how photosynthetic genes are turned on and off with changes in temperature.

“We are starting to get a picture of what is happening with photosynthesis at all levels, not just a biochemical level.”

The “translational” aspect of this research refers to the application of these findings from the lab to the field, potentially resulting in a new agricultural revolution.

But unlike previous agricultural revolutions that relied on plant breeding to change crop genetics, this revolution will rely on genetic modification.

Dr Conlan says that one of the benefits of genetic modification for agricultural crops is that “it’s super highly regulated” when compared to traditional crop breeding that can involve changes to hundreds of genes.

“What we are doing now is placing a single gene within the genome, and we know exactly where it goes and what effects it should have.

“If we want to feed that many people then it’s the only way we can do it.”

This article was originally published on Australia’s Science Channel. Read it here.

D.I.Y. Science – Grow your own food

Michelle is bringing sustainable food to the world